If you know Portland vintage fashion, you know Lodekka. Erin Sutherland opened her antique, double-decker retail bus in October 2010, and Lodekka became a local landmark even before partnering with its “retail soul mate,” Wanderlust Mobile Shop. “I equate the bus to a neighborhood pub,” she says. “I just want to bring my friends and neighbors what they’re looking for.” 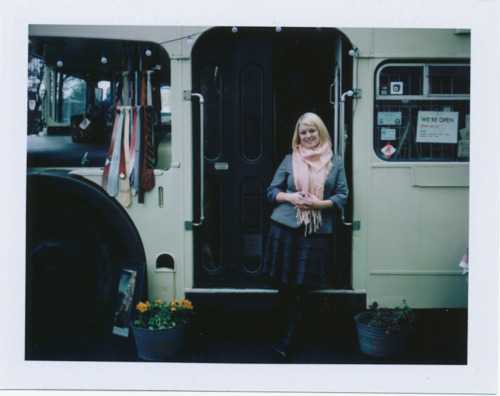 The original idea came from food carts. I knew I was going to lose my job, so I started looking at decommissioned food carts all over the city. Then I found this double-decker bus on Craigslist, down in Eugene. It’s an original British Bristol Lodekka from Liverpool from 1965.

Between then and opening were the most harrowing six months of my life. I spent the covered in paint, wearing sweats, sweaty and disgusting. For six months, all I did was work on this bus, all day long. I would get so covered in sweat and dirt, wearing a hazmat suit, gutting this thing. Everything about it was hard.

On top of all that, I was gathering inventory. I was building the website, writing and sending out press releases, updating the rebuilding daily on Facebook. I spent all my savings. I used up all my unemployment checks.

Yeah, it’s a personality trait. I had to get it open ASAP. Why didn’t I wait and open in the summer?

You know, though, I was seeing all these other mobile businesses open. The food cart scene was exploding. I had to do it.

When I opened, so many people said, “I can’t believe it! I totally had this idea!” I would just smile and think, “You had an idea? Really?” The project was so much work that I quickly realized I didn’t need to feel intimidated by other people’s ideas. 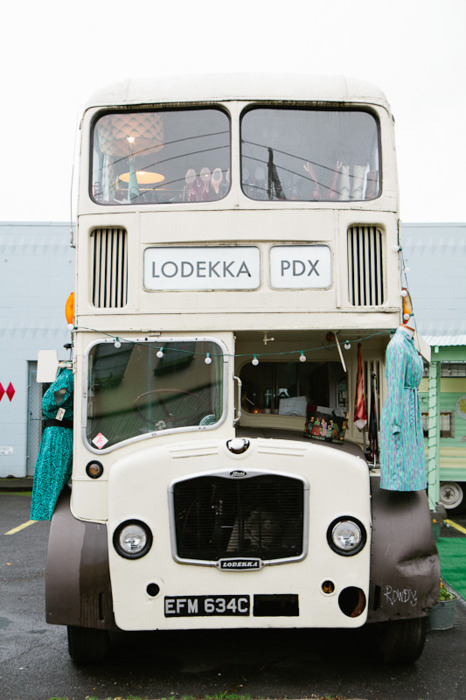 How did you start collaborating with Vanessa at Wanderlust?

Vanessa and I met when we were both interviewed for NPR’s Marketplace. It took an international finance show for us to meet. But we had beers and hit if off immediately.

We realized that moving close to each other made sense. We didn’t feel in competition. We felt like we could focus on different things: She does handmade; I don’t. We found this spot, we fit both vehicles in there, and it was perfect.

The thing is, we both wanted allies. It’s really isolating, working alone in an enclosed space all day long. If you have to go to the bathroom or if you get sick, she’s got my back and I’ve got hers. It takes a load off my mind to have a partner.

A lot of times, people will buy several items from her shop and several from my shop. We’ll literally pass their credit card across to each other.

What’s been your biggest challenge of operating Lodekka?

Two things: First, no storage. Most clothing stores have a back room. I keep my inventory in my car, a little Volkswagen Jetta. I used to keep it in my Mini. That was interesting.

And temperature control. A vehicle has built-in heaters and coolers. Mine doesn’t run, so it doesn’t have that. It can get really hot in there. Everything else about it is great.

Lodekka appeared in The New York Times, Cool Hunting, NPR, Sunset, some Japanese magazines, to name several forums. How does this attention affect the way you work?

It hasn’t changed how I select my stuff, because I buy based on what sells. When people do stories about the bus, it’s about the bus or me. It’s never about the inventory.

I actually am glad they don’t. I don’t want to give the impression that I’m a high-fashion, trendsetting place. I equate the bus to a neighborhood pub. I have families and friends who stop in weekly. Their three-year-old drags them in. Their dog jumps in because it knows I have treats. It’s such an honor to be on Cool Hunting, but I just want to bring my friends and neighbors what they’re looking for.

One thing a lot of people don’t know is that my 67-year old mom does a lot of shopping for me. She’s got great style and an amazing eye. She’s got the so-ugly-it’s-cool concept down.

How do you source your stuff?

It’s pretty much all thrift stores, because I focus on wearable items and not high-end couture items. I always leave Portland. I’ll hit five towns in two days and spend the night. If I buy it cheaper out there, I can keep prices down for my customers.

What are you planning to do this year?

I’m going to start selling online. I’m going to probably use Etsy. I’ve been researching like crazy and interviewing friends as if they were potential customers. I’m still working it out.

I’ve always wanted to have either a blog or tweet photos of unlikely style icons of mine. People nobody ever would see as icons. Not the Marilyn Monroes or the Humphrey Bogarts, but people who are kind of obscure.

I’m starting with my inventory and thinking of who helped me think of this as stylish. Like women’s flannel shirts. I found this great photo of Marcia Strassman—she played the wife on Welcome Back, Kotter. She’s got the glasses. She’s got a gold chain with eagle’s wings on it. She’s got a big, probably men’s, flannel shirt on. I mean, that’s so Portland.

Summer comes to a close, but Setmore’s offices are still filled with busy bees. This month we’ve got some exciting…

Generate more leads and take bookings directly from YouTube. Using YouTube to promote your Booking Page can turn viewers and…

Google Makes It Easier for Small Businesses to Reach Customers.

Small business is one of the major driving forces of the national economy. However, the booming market has posed its…